Yesterday Bosco got up and hopped twice!  It was only a few steps across the yard and he is unsteady but it was amazing!

In other news, snuffel mats are where it’s at!  I made this for him yesterday and he is all about it!  And he was pretty spunky today,trying to chase bees in the yard! 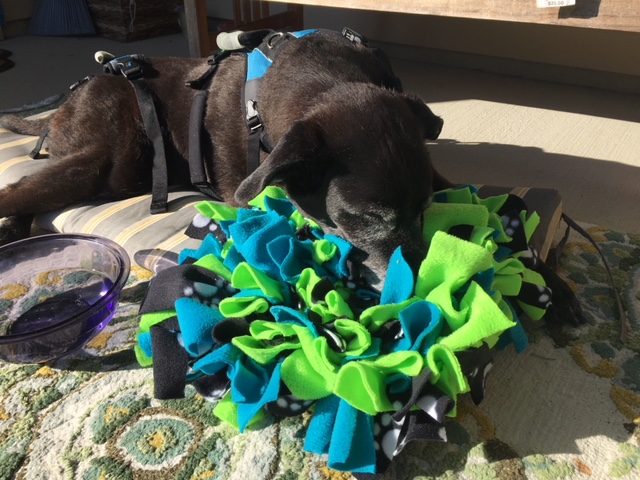 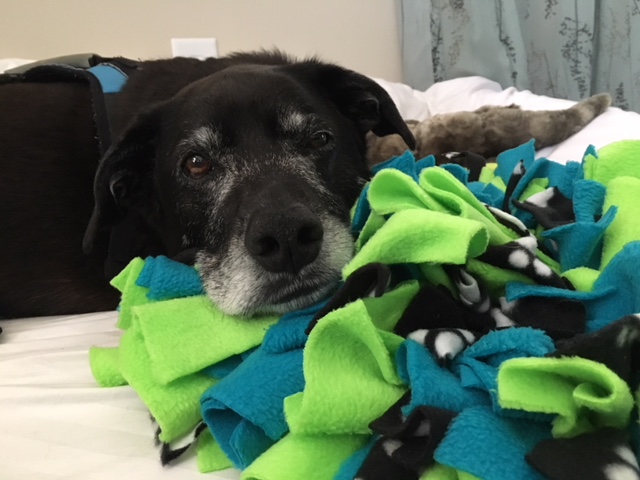 To remove ads from your site and others, upgrade to a Tripawds Supporter blog!

The holistic vet we see is the kindest person ever!  She offered to watch Bosco for us today.  Matt and I have been able to work things out so one of us is home most of the time but we couldn’t today.  (He’s a nurse and I have always admired him for it but man I sure appreciate the flexibility of his job too! ) Anyway, we couldn’t work out something for today.  I had to be at work because it’s testing season.  Poor kiddos.  Anyway, our vet came into work early so that she could watch Bosco for us.  He is still not walking but making steady progress.  She did more PT, acupuncture, e-stim, and massage.  When he isn’t too tired he is doing a great job of flipping his feet up.  We have seen him do something new each day. The short version is that she was pleased with his progress and she saw him just last Saterday! 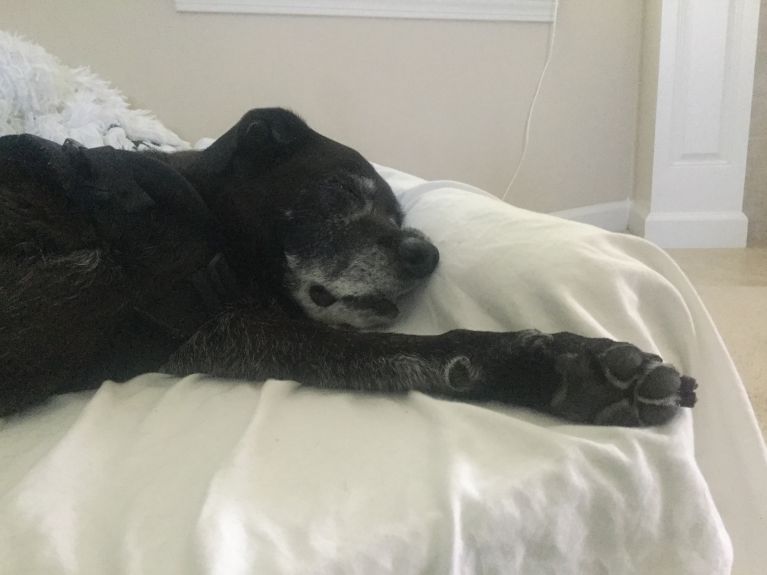 (Squishy nap time face after all that great PT🐶😴)

He may be able to walk again!  We are going to keep working on his PT excercises and see.  I’m waiting to hear from the vet involved in the Osteosarcoma vaccine study.  If we still can’t do the vaccine we will have to decide what to do about the cancer.  My husband is set against metronomics.  I don’t quite get that, but that’s an issue for another day I guess.  For now, we’re going to sit outside for a bit and enjoy the pretty weather.  It snowed yesterday and now it’s in the 60’s.  I have whiplash! 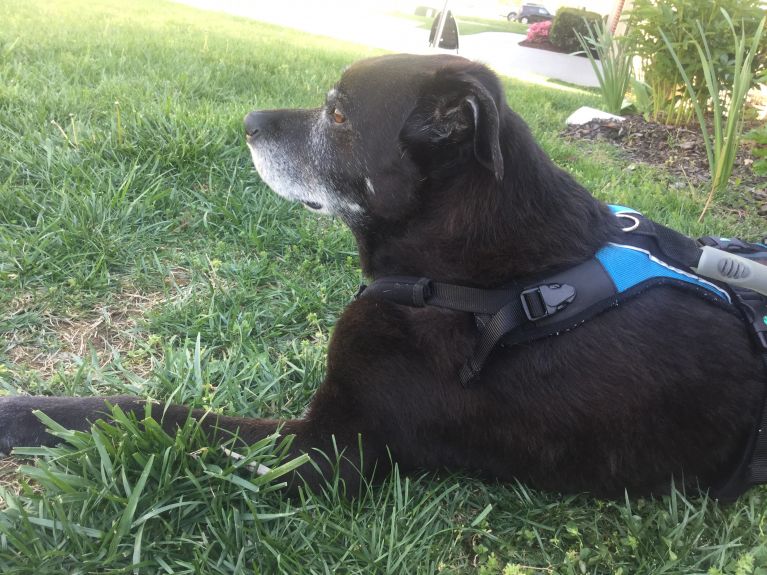 The last few days have been incredibly stressful.  My husband Matt, Bosco, and I traveled to Asheville, NC from Knoxville, Tn.  It’s about a 2.5 hour drive.  Everything was fine.  The night before we went on a walk.  Bosco looked great.  He was a little stiff in the morning but that’s kind of normal.

When we got to Asheville and got him out of the car he couldn’t walk.  The vet saw him early and without doing an MRI he suspected that either a tumor was pushing against his spine or that the cancer had metastasized to his spine.  At that point Bosco looked lethargic, couldn’t urinate, wag his tail, or flip his feet up.  The vet offered to euthanize or let us take him home on meds and see how things went.  Of course he did not feel that giving him the vaccine was a good idea.  We agreed.

We took him home and saw our primary vet so she could show us how to express his bladder.  Man it’s hard, physically, to do.  We tried at home and couldn’t do it so we ran him back to the vets before they closed and he peed by himself!!!  The next day he wagged his tail and we noticed a few other signs of improvement.  He was very alert but the meds made him drink a ton of water.  He threw up 3 times and had diarrhea.  He didn’t want to eat much too.

Then on Saterday, we took him to see his holistic vet.  She did acupuncture and some excercises.  At the end of the session he flipped  his feet instead of letting them hang when we lift him!  That was significant progress.  Also he has started to kick his feet when we carry him and can bare weight on his back legs with support for balance.

The holistic vet feels that the timing was suspicious.  He had an x-ray on Monday where they put him on his back and with the car ride she felt like that could have aggravated his back.  So we are doing PT excercise and I’m going to call ourPC vet and the vet involved in the study on Monday.

Matt and I are exhausted.  It’s been a ruff few days but things are better than what they were.  At least we don’t have to euthanize today, which is what I thought we might be doing.  We wount be selfish, but three vets have now told us it is not time and we are so relived.

We are so grateful for the support of all the vets that have helped us.  The one involved in the study, we have only met once in person but he was so kind and empathetic.  In fact, I thought he might cry in our consultation.  Also our holistic vet has been amazing.  She is even watching Bosco for a half day next week because we don’t have anyone else that can help us.

And….Matt just told me that Bosco’s feet are twitching while he dreams!!!!  This is the first time we have see that!

King of the mountain on his new orthopedic bed with back support.  Something our holistic vet suggested. 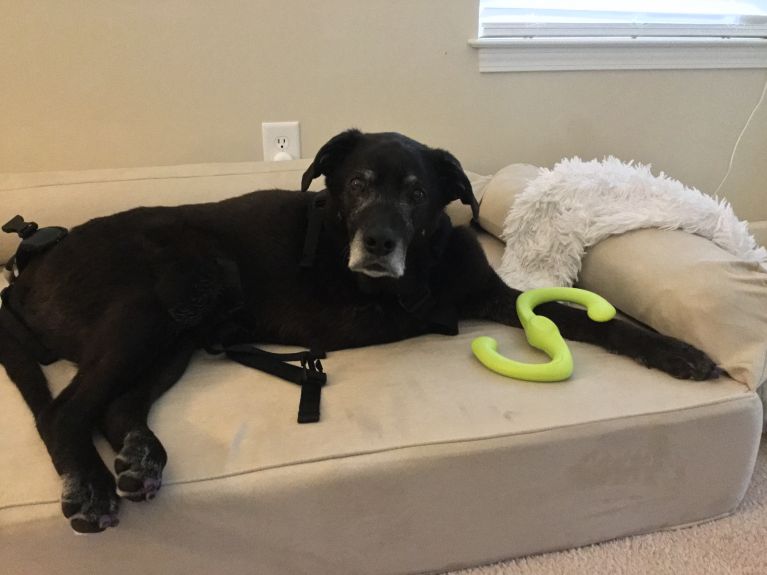 we held onto hope for a long time but today the x ray showed 2 mets.  My husband and I are stunned and devastated.  My sweet boy doesn’t deserve this.  Right now there’s not much  more to say. 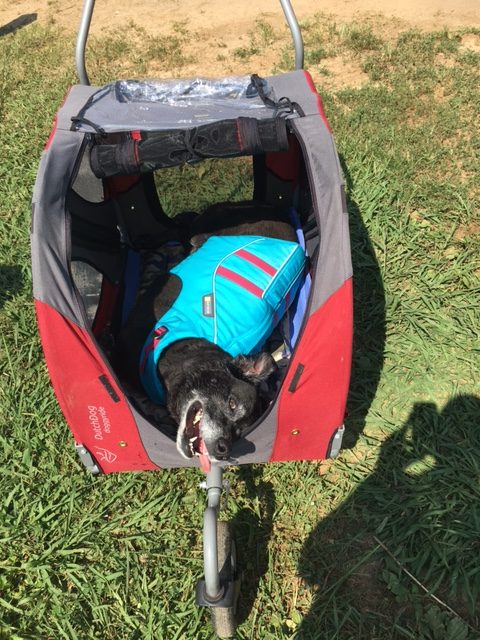 Tomorrow is the day.

Today was pretty mellow but great!  Wow, he has had a huge appetite today, which is probably a good thing since he has to fast tomorrow for blood work.  He ate lots of veggies and maybe… some steak.  Yeah he’s spoiled.  I’ll own that!

Also I played arround with a treat recipe and came up with my own honey ginger treat.  Bosco hung out in kitchen while I baked and enjoyed the smells.  He went nuts for them and just made my day!

I trimmed his toe nails and Dr. Buzby is on board too.  He is all set to deal with the slip and slide that is the flooring at the vet’s office.

Team Bosco or should I say Hungry Hungry Hippo is feeling cautiously optimistic about tomorrow’s tests!

Below, chillin on the couch begging from dad and generally acting like a lab! 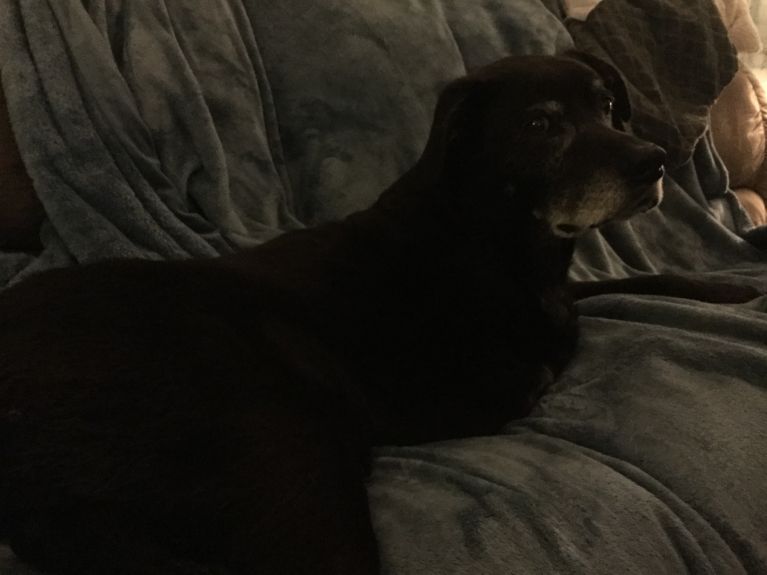 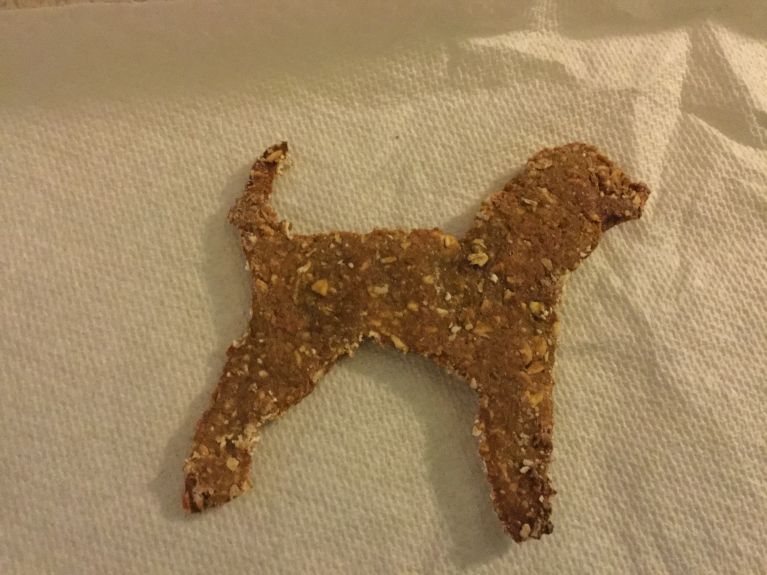